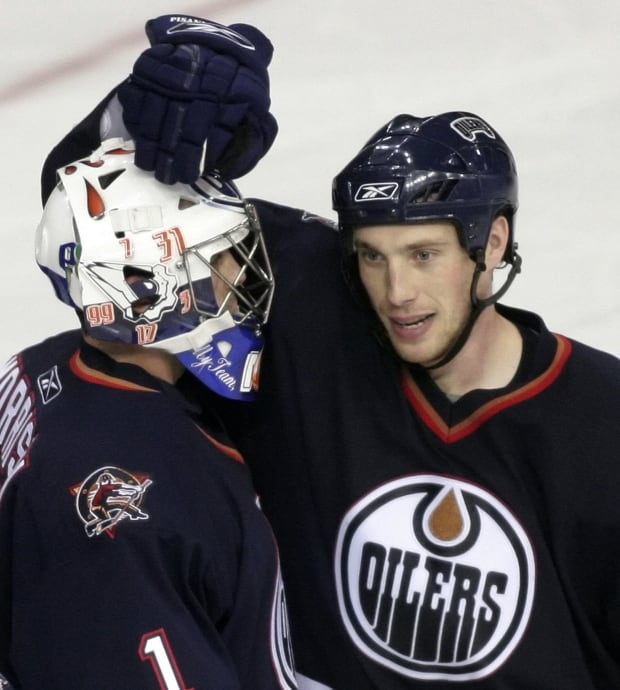 Although it’s been nearly 10 years since he scored some of the most memorable playoff goals in Oilers’ history, Fernando Pisani still hears about them from fans.

The former Edmonton Oiler playoff hero, now an assistant coach with the University of Alberta men’s Golden Bears hockey team, says without fail, someone will talk about where they were or what they were doing in the spring of 2006 when Pisani’s heroics helped lead the Oilers to the Stanley Cup finals.

As a kid growing up in St. Albert, Pisani idolized the 1980s Oilers and their big Stanley Cup wins. Little did he know that one day he’d be skating on the same ice.

In 1996, Pisani was drafted by the Oilers in the 8th round. Considered a long shot, he finally made the team in 2003.

PIsani still remembers the first time he walked into the Oilers’ dressing room at Skyreach Centre, as Rexall Place was called back then.

“You kind of catch yourself kind looking around and saying ‘wow this is amazing, these are some of the guys I grew idolizing growing up and they were in the same dressing room as me’, and you just sit there and are in awe and appreciate the moment and that’s something that I’ll never forget.” said Pisani.

At the time Skyreach Centre was undergoing major renovations. The old dressing room was nearly 30 years old and showing its age. Pisani recalled a pipe that dripped onto his stall every time water flushed through.

“Those are the kinds of things you laugh about now. At the time you were like, ‘that’s kinda gross.’ “

Pisani’s second full season with the club would turn out to be his best, and one that came within a goal of winning the Stanley Cup.

Pisani remembers starting the playoffs off in the first round and facing the heavily-favoured Detroit Red Wings at home on Rexall ice.  It was game 3, and the series was tied at one game apiece.

“Every time our trainers would go in and out of our dressing room to go put water bottles or sticks on the bench, you could just feel the energy inside that building and you could hear it too,” recalled Pisani. “It was pretty amazing on how loud that place got.”

And it got even louder during game 6, when Pisani scored his 4th, and 5th goals of the series, helping the Oilers pull off a massive first-round upset.

“To do that in front of your home team and hometown and having family and friends there, that was probably one of the more memorable experiences that I’ve ever had,” he said.

“There’s no better feeling to play in a rink that is so electric and so exciting, and then you just step on the ice and as soon as the first guy steps on the ice, the whole place is erupting, going crazy and this is just to take warm ups.

“You try to explain it to people, but unless you were there, a part of it, and you feel it, they don’t understand the magnitude of how special that run was and how exciting it was.”

The 8th ranked Oilers would go on to upset the Wings, the San Jose Sharks, and the Anaheim Ducks before losing out to the Carolina Hurricanes in seven games.

During that magical run, Pisani scored 14 playoff goals, many of them on home ice, with family and friends in the crowd.

Pisani says he’ll remember his brief time at Rexall Place fondly. He says it’s hard to get used to the idea that the team won’t be playing there this fall.

But it’s a change Pisani says is needed, as a new generation of fans and new crop of Oilers, look to make their own mark.

“I guess it’s time for them to start a new legacy, and a new chapter for the Oilers organization and hopefully it’s one that involves playoff hockey.”

Now wouldn’t that be something. 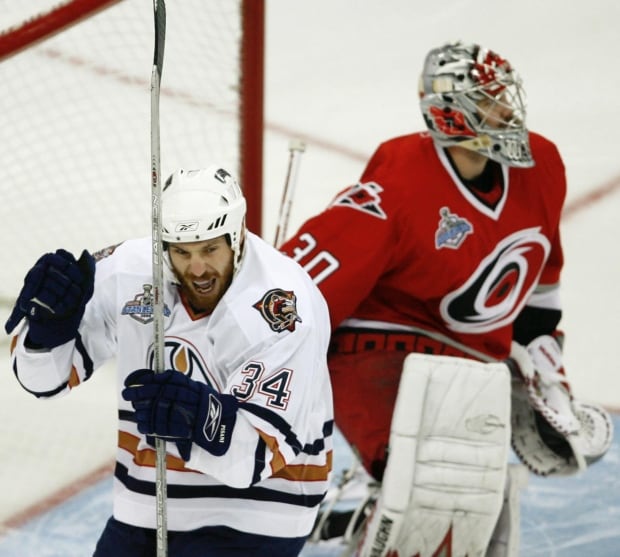 Fernando Pisani celebrated after scoring a goal in Game 5 of the Stanley Cup Finals against the Carolina Hurricanes in June 2006. (Paul Chiasson/Canadian Press)