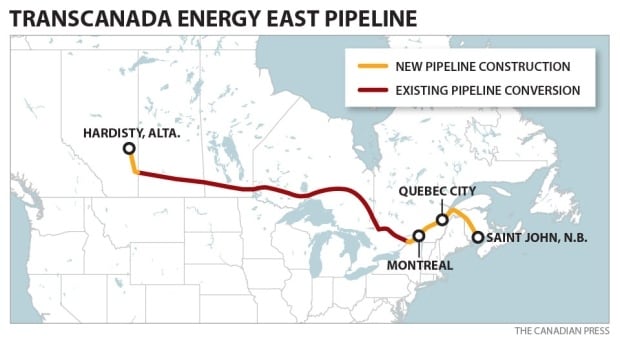 The Grand Chief of Kanesatake, the Mohawk community hugging the north shore of Lake of Two Mountains, says the Energy East pipeline could be catastrophic for his people – and moving forward without the community’s consent violates aboriginal and treaty rights under both Canadian and international laws.

Serge Simon was responding to recent news that the pipeline’s proponent, TransCanada Inc., has applied to the province for permits for seismic exploration in the Ottawa River as a precursor to the proposed construction of Energy East.

The Lake of Two Mountains is part of the Ottawa River delta, where the river widens to meet the St. Lawrence River. Kanesatake, a patchwork of Mohawk lands that intersect with the municipality of Oka, is about 60 kilometres due west of Montreal.

In an interview with CBC News, Simon said an oil spill around the Lake of Two Mountains would be disastrous for drinking water, and the proposed route cuts through traditional hunting and fishing grounds.

“We still fish for perch, walleye, bass, catfish and sturgeon,” he said.

“These are like regular staples for people around here.”

On March 9, Simon sent a strongly worded seven-page email to Quebec Premier Philippe Couillard, deriding the Quebec government for failing to consult with his community and with other First Nations in Quebec before issuing permits to TransCanada for other rivers, including the St. Lawrence.

“While we insist on both Quebec and Canada respecting their duty to consult Kanesatake as per the Constitutional duties they owe us, Kanesatake will not be bound by any authorization given by either Quebec or Canada in respect of the Pipeline,” Simon wrote.

“Our Council has the right, as well as the duty according to our laws and customs, to say stop this dangerous project.”

The $15.7-billion Energy East pipeline would carry a million barrels a day of western crude as far east as Saint John to serve domestic refineries and international customers.

TransCanada Corp.’s proposed pipeline project, which would carry 1.1 million barrels a day from Alberta through Quebec to an export terminal in Saint John, N.B. (Canadian Press)

The proposal has run into major opposition in Quebec, with the mayors of Montreal and dozens of surrounding municipalities saying the project’s environmental risks outweigh its economic benefits.

Simon said the standing treaties with his First Nations community are valid contracts under international law, and he’s willing to take the government to international court, if need be.

“If they want to come in here and force a surrender on me, that is illegal under international law,” he said.

In an emailed statement, TransCanada spokesman Tim Duboyce said dialogue with indigenous communities has been ongoing since the project started in 2013, and 51 Community Engagement and Funding Agreements (CEFAs) have been signed with First Nations and Métis communities.

The statement also stresses the economic benefits to the communities affected.

“At this point in time, we are not going to discuss any specific cases, since we remain relatively early in the
evaluation and assessment process,” Duboyce said in the statement.

Simon said he has been meeting with chiefs from across the country, and plans to create an alliance against tar sands oil and the pipeline are underway.

He said any jobs afforded by the project would be short term, and the threat to wildlife and the climate represent too great a cost to allow the pipeline to proceed.

“They could take their funding and shove it,” he said.

“In the end, we’re accepting blood money. And we’re never going to accept it. I would rather starve before I took one dime from these guys.”