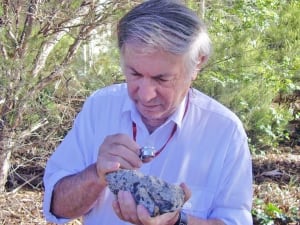 Australian scientists have uncovered what is believed to be the largest asteroid impact zone ever found on Earth, in central Australia.

A team lead by Andrew Glikson from the Australian National University (ANU) said two ancient craters found in central Australia were believed to have been caused by one meteorite that broke in two.

“They appear to be two large structures, with each of them approximately 200 kilometres,” Glikson said.

“So together, jointly they would form a 400 kilometre structure which is the biggest we know of anywhere in the world.

“The consequences are that it could have caused a large mass extinction event at the time, but we still don’t know the age of this asteroid impact and we are still working on it.”

Each crater is itself bigger than the 180-kilometre-in-diameter Chicxulub crater in Mexico, linked to the the meteor strike thought to have wiped out the dinosaurs.

However, while the two craters combined make up the biggest impact zone in the world, they are each smaller than the two biggest impact craters in the world — one in Sudbury, Ont., thought to be caused by comet impact and estimated to have been 250 kilometres across originally; and the largest in the world, a 300-kilometre wide crater in Vredefort, South Africa.

The material at both Australian impact sites appears to be identical which has led researchers to believe they are from the same meteorite.

Over millions of years the obvious craters have disappeared, but geothermal research drilling revealed the secret history hidden under an area including South Australia, Queensland and the Northern Territory.

“Under the Cooper Basin and Warburton Basin we don’t have that information and our seismic information covers up to five kilometres and some other data such as seismic tomography and magnetic data.

“The mantle underneath has been up-domed which is a very promising indication of a major event.”

There are many unanswered questions about the underground site and whether the twin asteroid impact could have affected life on earth at the time.

“When we know more about the age of the impact, then we will know whether it correlates with one of the large mass extinctions [at the end of specific eras].

“At this stage we do not have all the answers, but there has been a lot of interest and people are certainly interested in any impact on the dinosaurs.”

The research has been published in the geology journal Tectonophysics. 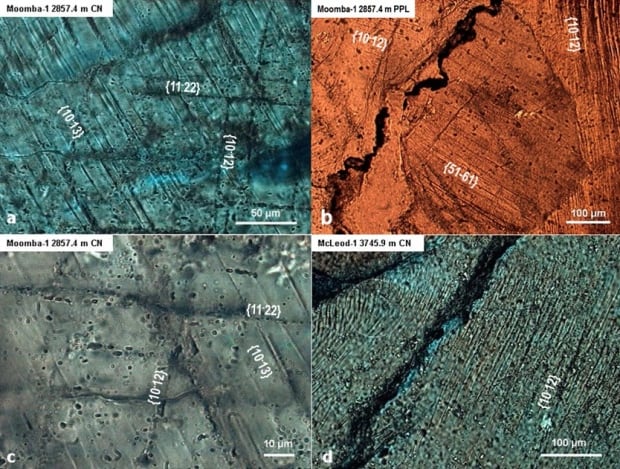 Rock features were deformed by the shock of the impact when the meteorite chunks hit Earth. (Australia National University)