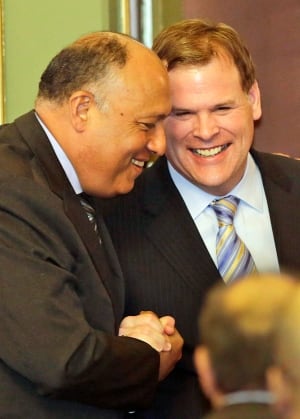 A few weeks ago, from Switzerland, John Baird tweeted a picture of himself grinning into the camera, shaking the hand of a short, unprepossessing fellow who seemed amused and distracted by something elsewhere in the room.

“Great to have dinner & speak with President el-Sisi last night,” gushed Baird, who was at the time still Canada’s foreign affairs minister.

A few days earlier, in Egypt begging for the release of a Canadian journalist, Baird had raved about the governance of Abdel-Fattah el-Sissi, the former Egyptian top general who used the army to grab power in 2013.

“I personally reaffirm Canada’s strong support for the new government of Egypt and its transition to democracy and the inclusion of human rights and rule of law,” Baird said.

Several other Western governments, including the U.S., have had similar praise for el-Sissi’s regime; Baird’s was merely the most honeyed.

Secretary of State John Kerry has said that el-Sissi gives “a very strong sense of his commitment to human rights.”

And American, British and European officials can barely mention Egypt without including the phrase “democratic transition,” something that is not much in evidence.

Left diplomatically unsaid is the massacre of up to 1,000 protesters by el-Sissi’s shock troops in Cairo’s Raba’a Square 18 months ago.

Most Western governments made a fuss at the time (though Canada’s mild statement seemed to place equal blame on the slaughtered protesters). But no one wants to bring up that episode now.

Also ignored these days are the tens of thousands of Egyptians who have disappeared into Egypt’s prisons, where enthusiastic torturers labour on, oblivious to el-Sissi’s supposed emphasis on human rights.

Then Canadian foreign minister John Baird with his Egyptian counterpart Sameh Shukri in Cairo in January, when Baird was lobbying for the release of Egyptian-Canadian journalist Mohamad Fahmy. (The Associated Press)

Foreign leaders prefer not to bring up the razing of hundreds of civilian homes and forced re-locations near the border with Israel in the Sinai — purportedly to facilitate the hunting of Islamist militants — or the regime’s harsh repression of any dissent, or even free speech.

Those details, unfortunate and lamentable as they may be, are all secondary to Egypt’s “return to stability,” as Prime Minister Stephen Harper has called it.

As British journalist Tom Stevenson puts it in his recent investigation of Egypt’s secret prison system: “The West appears to see no contradiction in supporting the ‘stability’ of the el-Sissi regime at a time when the Egyptian population is suffering from the extreme instability that comes with mass arrests and torture.”

Stevenson, who was reporting from Cairo for the London Review of Books, is a courageous reporter, but he’d better watch his back.

Mohamed Fahmy, the Egyptian-Canadian journalist whose work for Al Jazeera’s English network was unremarkable by comparison, has spent months in Egyptian prisons, and may yet do more.

Baird’s praise of el-Sissi and Canada’s promise of millions in aid to Egypt have managed to secure Fahmy nothing more than a new hearing.

Stevenson has a lot of experience in Cairo. His report asserts that Egypt’s security organs have established a fearsome, secret network of prisons to accommodate the vast numbers of people rounded up.

For Egypt, says Stevenson, the result is “a spike in the number of citizens in detention unlike any in its history.”

Stevenson’s account is hardly isolated: groups like Human Rights Watch (whose officials have been barred from Egypt) and Amnesty International have documented the purges and abuses.

But Stevenson actually names and locates what he calls the “black” prisons.

He describes a range of tortures, including electric shocks, dousing with freezing water, use of boiling water and oil, beatings, strappings and rape, and prisoners crammed so tightly in airless, insufferably hot cells that they cannot move, let alone sleep or squat to relieve their bowels. 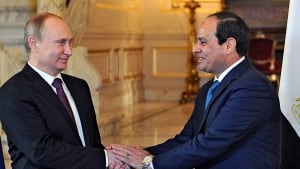 Western governments have complained about these abuses from time to time, especially after the military coup in 2013.

But once el-Sissi morphed from top general to president a year later, after a wildly one-sided vote, Western reservations largely fell away.

The U.S. resumed shipments of attack helicopters and other military aid. And Baird applauded el-Sissi’s efforts to “confront the terrorist acts of the Muslim Brotherhood.”

The Brotherhood is, of course, the principal target of the regime.

The government has banned it, again, and arrested its members en masse. The usurped former president, Mohammed Morsi, remains an inmate in Borg al-Arab prison.

But el-Sissi didn’t stop there. His government went after labour activists, and writers, and academics. His soldiers occupied universities.

Anyone who speaks out, says Stevenson, is “regarded as an army would regard captured combatants.”

It’s all about Iran

In January, el-Sissi’s troops opened fire on protesters marking the fourth anniversary of the short-lived revolution that ousted the former dictator, Hosni Mubarak. They killed at least 23 people.

Ferry de Kerckhove, Canada’s former ambassador to Egypt, laughs at the very idea that human rights in Egypt have any importance for the West. 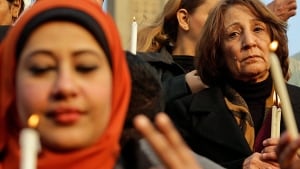 Egyptians light candles during a vigil for 21 Egyptian Christians killed by ISIS last month. The brutal murders provoked Egypt to launch air strikes against ISIS’s bases in Libya, bringing el-Sissi’s government more closely into the fight against the Islamic State. (The Associated Press)

“Nobody cares,” he says. Of paramount importance, he says, is keeping the Brotherhood crushed, respecting the peace deal with Israel, and playing along with any agreement between Western nations and Iran to limit its nuclear ambitions.

It is essential that Saudi Arabia and Egypt not obstruct that deal, says de Kerckhove: “Why would they make life miserable for el-Sissi when they are trying to achieve that? Human rights are completely out the window.”

So, billions in aid are flowing in. So is European investment.

Stephen Harper, meanwhile, has said that Egypt’s “transition toward democracy,” while of course desirable, shouldn’t be so abrupt that it would risk “forces from the street that run out of control.”

After all, he said in a speech in Tel Aviv last year, el-Sissi’s elected predecessor was bent on using an element of democracy, an election win, to create an “authoritarian Islamic state.”