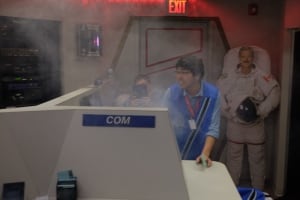 I’m on a spaceship that’s just entered orbit around Mars when the lights dim, alarms blare and smoke starts spewing through the cabin. I jump from my workstation, confused and anxious to know what’s going on.

“Who has a fire extinguisher?” barks our commander, Martin Fischer, gesturing toward an instrument panel at knee level. “Something just exploded in there.”

The lights grow dim, alarms start blaring, and the cabin of the spaceship starts to fill with smoke after the ship is hit by a coronal mass ejection, a blast of plasma from the sun. (Emily Chung/CBC)

OK, so I’m not actually in outer space. I’m on the Voyage to Mars at the Challenger Learning Centre at the Ontario Science Centre in Toronto.

It’s a space simulator that’s unique in Canada and part of the legacy of the Challenger disaster in 1986, one of the biggest tragedies in the history of space exploration. Unlike other Mars simulations for scientists and astronauts, this one provides limited access to the public.

The program is designed to provide would-be astronauts with an educational and entertaining taste of modern space travel in replicas of a NASA mission control room and the inside of a spacecraft.

If you’ve ever wanted to visit Mars, this is about the closest you can get right now — or might ever get.

While the Mars One Project now say it aims to send humans on one-way trips to the Red Planet by 2027, experts, including former Canadian astronaut Julie Payette, say the technology won’t be ready by then.

The world’s space agencies currently aim to send astronauts to Mars after 2033, so a real base on Mars won’t be built anytime soon.

The crew I’ve joined is from the Ontario Science Centre’s science school, which brings together up to 30 high school students at a time from around the province to complete Grade 12 science and math courses during a semester at the centre.

Our mission is set in the year 2076, when most of my fellow crew-mates will be 60 years old. 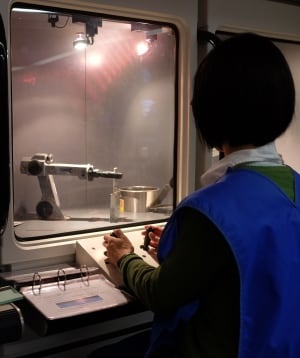 CBC journalist Emily Chung operates a robotic arm using two joysticks. Her job is to grasp and examine a trio of solar panels outside the ship to see how badly they have been damaged by impacts from meteoroids. (Courtesy Emily Chung/CBC)

Our mission is to navigate to Mars and replace a crew that has spent the last two years at a base on the Red Planet and is eager to return to Earth.

Each of us is assigned a job, from the “nav” team calculating a course for the spacecraft to a space weather team that keeps tabs on solar storms that could disrupt electronics and communications on board.

I’m assigned to a team operating a trio of robotic arms. My teammates Ellie Badun of Unionville and Eleanor Day of Etobicoke, both 17, are dealing with dangerous “radioactive” and “toxic” compounds. My job is to examine “solar panels” outside the ship to see how badly they’ve been damaged by meteoroids.

There are constant interruptions — messages from Mars Mission Control, radiation checks from the medical team and updates about potentially dangerous space weather.

Amid the distractions, using two joysticks to manipulate so many rotating, bending joints and a hand is harder than it looks. I’m frustrated after clumsily dropping all three panels.

I’ve been embarrassingly unproductive by the time we count down before entering into a rumbling orbit around Mars.

It’s shortly after that when the alarms go off and smoke starts pouring through the ship. A coronal mass ejection — a blast of plasma from the sun — has hit our ship and damaged our electronics. 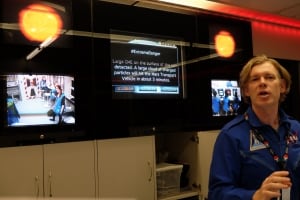 ‘What we hoped would not happen has happened,’ Flight Commander Martin Fischer tells us after a notification of a solar eruption appears on the computer screen. He advises us to keep an eye on the computers to make sure they’re not malfunctioning. (Emily Chung/CBC)

Someone yanks a burned out component from the instrument panel while the communications officer sends a message to Mars Mission Control. There’s no response — we can no longer hear them and they can’t hear us.

Fortunately, the Mars Mission Control team comes up with a clever solution. A member appears on the video screen, holding up a slip of paper scrawled with the words: “Are you okay?” We scramble to write a response.

We communicate that way until our ship makes a harrowing near crash-landing on Mars (Thanks, Nav Team!) about 15 minutes later. Red lights blink, there’s a whirring noise, and we enter the airlock to meet the crew at Mars Mission Control.

The science centre’s Challenger Learning Centre is part of a network of 40 educational space simulators created in partnership with NASA by the families of the crew who died when the Challenger space shuttle exploded in 1986. The mission featured a “Teacher in Space” educational component and one crew member was Christa McAuliffe, a high school teacher from Concord, New Hampshire.

​Most of the simulators are in the U.S. The one at the Ontario Science Centre opened in 1992, and was rebuilt about nine years ago. It’s hidden behind unmarked doors in a hallway at the back of the centre and isn’t open to ordinary visitors.

About 6,000 to 9,000 students and a handful of corporate groups take part in the program each year. The science centre charges $15 per student and a minimum of $62.50 per corporate employee. 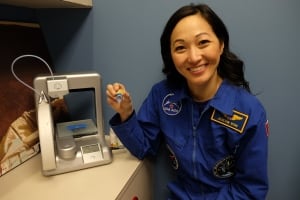 The day that I visited, the Challenger Learning Centre debuted an activity in which the crew at Mars Mission Control had to 3D print a custom finger splint using a real 3D printer. The activity was designed by Julielynn Wong. (Emily Chung/CBC)

Some aspects of the simulation are clearly unrealistic — we experience full gravity, the trip doesn’t take the better part of a year and there are no communications delays between Earth and Mars. But the details, from the in-ship lighting to the graphics of Mars appearing on our screens, are still impressive.

The simulation does a good job of conveying some aspects of space missions — the emphasis on procedures and communications that are funnelled through one point of contact, and the constant activity, problem solving and teamwork that make up an astronaut’s day.. 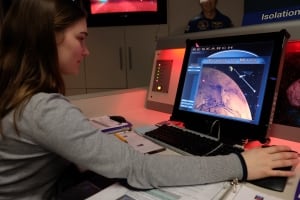 “We try to parallel what’s going on in the real space program,” she says.

In fact, the day we visited, the program debuted an activity in which the crew at mission control on Mars had to 3D print a custom finger splint using a real 3D printer. Toronto doctor and 3D printing expert Julielynn Wong designed the module for the centre after a 3D printer was sent up to the International Space Station.

When the simulation finally ends with the successful departure of the new Earth-bound crew, everyone applauds loudly and smiles light up their faces.

“That was amazing,” says Badun, adding that she felt a real sense of accomplishment when the mission was complete.

Day says she learned a lot about space missions from the experience.

“There’s so much organization that goes into it … And there’s so many things that can go wrong.”

While we learned some science concepts — about the effects of solar storms and the nature of Mars’s moons, the emphasis of the simulation was more on teamwork and problem-solving.

Still, the experience felt impressively real to me. I left feeling I had a better sense of what space missions are like — but that I need to work a lot harder on my robot-operating skills before I’m ready to become a real astronaut.