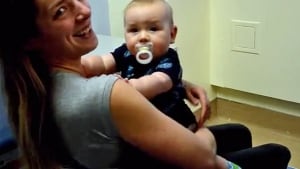 Doctors commonly get requests from parents to delay young children’s vaccinations and despite their better judgment, they often give in, a new U.S. study finds.

In a national survey of pediatricians and family doctors, researchers found that 93 per cent said they handled such requests in a typical month. One-fifth said that at least 10 per cent of parents they see want to postpone some vaccinations.

And while most doctors believe that veering from the recommended vaccine schedule is risky, they often agree to parents’ wishes.

The findings, published online March 2 in Pediatrics, come at a time of rising concerns about “under-vaccination.”

Measles — a childhood disease that was declared eliminated in the United States in 2000 — is staging a comeback. So far this year, outbreaks have hit 17 states and Washington, D.C., sickening at least 154 people, according to the U.S. Centers for Disease Control and Prevention.

The main outbreak was traced to Disneyland, in California. The CDC said it probably began with an unvaccinated traveller who became infected in another country before visiting the amusement park. But that person has not been identified.

Such “imported” measles cases can spread when people in the community have not been vaccinated. One issue is that some parents choose not to vaccinate their children at all, for religious reasons or personal beliefs — often related to unfounded fears over vaccine safety, doctors say.

More often, she said, they ask to postpone certain shots, and “spread out” their child’s vaccinations over a longer period.

Under the current vaccination schedule recommended by the CDC and other groups, a child gets up to 25 shots in the first two years of life, including multiple shots in one doctor visit.

Some parents fear that it’s “too many, too soon,” because they’ve heard that all those jabs “overwhelm” a baby’s immune system, said Dr. Paul Offit, an infectious disease specialist at Children’s Hospital of Philadelphia.

“But there’s no science behind that idea,” said Offit, who was not involved in the new study. Worse, he added, delaying certain shots “only increases the amount of time that kids are susceptible to disease.”

most doctors yielded to parents’ wishes

Kempe agreed — as did most doctors in her study.

Of the 534 doctors surveyed, 87 per cent said they believe that parents who request delays are putting their children’s health at risk. Another 84 per cent said that spreading out youngsters’ shots causes needless additional pain.

Despite that, most doctors yielded to parents’ wishes, the study found. One-third often or always agreed to spread out vaccinations, while another third said they did so sometimes.

But those attempts were only “somewhat effective,” at best, doctors said.

“I think it’s important to try to influence parents before their vaccine concerns have set in,” Kempe said. One way to do that, she added, could be through education during pregnancy.

There also should be a greater focus on countering vaccine misinformation, Kempe said.

“The anti-vaccine movement has been better than the ‘pro’ side in getting their messages out,” she said.

Offit said he doesn’t blame parents for being confused or hesitant about vaccines. “All of these vaccines are against diseases that parents today have never seen, and they involve biological substances that most people don’t understand,” he said.

As for doctors who give in to parents’ requests, Offit doesn’t blame them, either. They have limited time during an office visit to explain why the recommended vaccine schedule should be followed, and if parents are already convinced otherwise, there’s only so much a doctor can do, Offit noted.

“How do we address this?” he said. “Unfortunately, I think people will have to see some of these diseases come back. We’re seeing a backlash, right now, against the anti-vaccine movement. Nothing speaks louder than measles.”