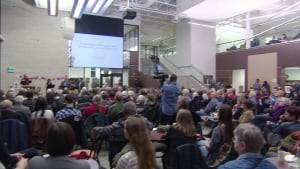 They’re helping First Nations climb out of poverty across the country and pumping millions of dollars into local economies, yet in Winnipeg the federal government is fighting a prolonged legal battle to keep a vacant army base from becoming an urban reserve.

At a recent meeting organized by the Canadian Mennonite University, residents in the Tuxedo and Charleswood areas had a chance to meet with one of the First Nations vying to develop an urban reserve at Kapyong Barracks.

The former military base has been sitting empty since 2004 and many of the buildings and houses on the 150-acre property have fallen into serious disrepair.

Yet the prospect of an urban reserve had many in the audience wary.

The discussion was moderated by David Balzer, an Assistant Professor of Communications and Media at the Canadian Mennonite University. He bristled at suggestions the urban reserve could bring down property values.

“Why do we presume if it’s First Nations, it’s going to be the ‘hood?”

One of the panelists was James Wilson, Manitoba’s Treaty Commissioner. He said the comments prove more needs to be done to educate the public about what urban reserves can be.

“Their only connection to a reserve may be what they see on the news and a lot of time those aren’t positive stories.”

Wilson told the audience that urban reserves have been a boon to the local economy in other cities, like Vancouver and Quebec City. He also pointed to the Muskeg Lake Cree Nation, which has had an urban reserve in Saskatoon since 1988.

“The jobs and the wealth that’s created out of that property has been tremendous,’ Wilson said. “It took a property that was a derelict train yard and turned it into what is now the business hub of the south-west part of that city.”

Despite these assurances, there was a still a lot of hesitation from the audience.

“It’s not that people are opposed but there is a fear element,” said one audience member, adding that residents don’t want high traffic or casinos in the area.

“If you want us to go along with your ride, and we’re willing, then we’ve got to know what you’re going to be doing there.”

The rural municipality of Headingley lies just west of Winnipeg. To many, it’s just a strip of industrial buildings on the way in and out of the city.

For the Swan Lake First Nation, however, it’s been a gold mine.

The 50 acres of land they own straddles the Trans-Canada highway and was converted to an urban reserve by the federal government in 2002. It’s home to a few offices, a gas station and a small video lotto gaming room.

But those few businesses have brought in millions of dollars for a community once mired in a $2.8 million deficit.
Since the urban reserve has been established they’ve been able to build businesses like a solar farm, buy a bison herd, and set up an RV resort and rental cabins.

The community also bought new school buses, built a splash pad for the kids and constructed a modern band office.
And while dilapidated housing is the norm in many other First Nations. Swan Lake has been able to renovate around 95% of the community’s houses.

Many places in the country – First Nation or not – are seeing their young people leave for greener pastures, but Swan Lake has people returning.

Justin McKinney, 22, was drawn back to his community after a 13 year absence by the lure of jobs and improved infrastructure. Especially for the children and youth who he works with in the band’s recreation department.

“It gives the kids places to play around, instead of getting into trouble.”

Francine Meeches is the community’s chief. She says she can’t understand why some some people would be afraid of urban reserves. 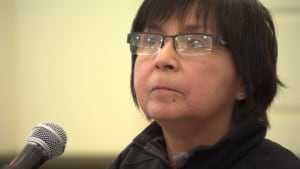 “People in this province can’t continuously say ‘you know what, because that’s a reserve, don’t go there.’ We welcome anyone on our properties. You don’t have to get permission to come and buy gas or come into our gaming centre. It doesn’t work that way,” she said.

It’s been a far different road to an urban reserve for the Sapatoyak Cree Nation, who recently opened a gaming centre in the town of Swan River, a small town in western Manitoba.

Like other urban reserves, the biggest fight was the negotiations with the federal government. Sapatoyak first bought a 14-acre property in Swan River in 2006 but it took 6 years to have it converted to reserve.

Unlike Winnipeggers worrying about what an urban reserve might do to their property values, Swan River’s town council welcomed it with open arms.

“That was certainly a welcome surprise,” says Chris Henderson, who heads the Treaty Land Entitlement Committee of Manitoba. The organization represents 21 First Nations. 6 of whom are eligible to create urban reserves.

Two years before the land was even converted to a reserve, Henderson says the town had already signed a ‘municipal services agreement’ with the First Nation. Since the town couldn’t tax First Nations, they negotiated an agreement that lays out how the band will pay for things like fire protection, water, etc.

So instead of taxes, the band pays the equivalent cost.

Those municipal service agreements are common throughout Saskatchewan, where there are 54 urban reserves. Henderson says it’s part of why municipalities there are so open to the idea.

After years of negotiations, the Long Plain First Nation established Winnipeg’s first urban reserve in 2013. Located in a area next to the Polo Park retail district, you probably wouldn’t know where the city ends and the reserve begins. 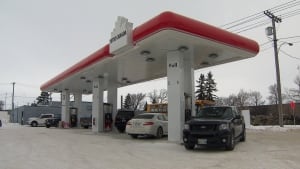 This Petro-Canada gas station and convenience store at 490 Madison St. in Winnipeg is owned by the Long Plain First Nation. (CBC)

“It would be seamless. That’s something that we need to embrace as the city of Winnipeg.”

Hudson says an urban reserve at Kapyong Barracks could be like the Westbank First Nation in the interior of British Columbia, where development melds with Kelowna and provides jobs and economic opportunities for all.

“We need to stop calling this a First Nation initiative. It’s a community initiative.”