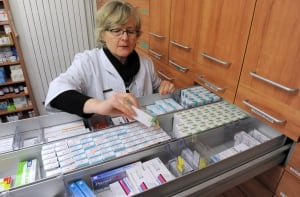 A universal prescription drug plan could reduce total spending on medications in Canada by billions and cover everyone at an affordable price for taxpayers, health policy researchers say.

Canada is the only developed country with universal health insurance coverage that does not also offer universal prescription drug benefits.

About one in 10 Canadians say they can’t afford to take their medications as prescribed, previous studies suggest.

In Monday’s issue of the Canadian Medical Association Journal, researchers say the extra total cost to government of providing universal pharmacare could range as high as $5.4 billion a year, but would likely be about $1 billion, depending on exactly how much can be saved through bulk purchases of medications and other measures.

At the same time, it would save the private sector the $8.2 billion annually it spends on prescription drugs, mainly through employee health plans.

“When we did the analysis, we were, at first, a little bit surprised,” said study author Steven Morgan, a professor of health policy at the University of British Columbia in Vancouver. “Wow. Canada can really save billions of dollars by covering everybody for virtually every drug? And then we started to look deeper at the math, and it made perfect sense.

If Canada achieved “middle of the pack” spending as in comparable countries like Switzerland, Italy and Spain, and achieved the rates of generic drug use seen in some provincial drug plans, a universal public drug plan would reduce total spending on prescription drugs in Canada by $7.3 billion per year, the study’s authors say.

Studies in the U.S. suggest that providing prescription medications for free to patients increases the chance they’ll actually take the medicines they need and, in the long run, improves their health and reduces their demand on the health-care system, Morgan said.

Studies suggests one in 10 Canadians find it a financial strain to take medications as prescribed. (Fred Tanneau/AFP/Getty Images)

Health Minister Rona Ambrose wouldn’t say whether she would favour a pharmacare program. She does think Canada can get a better deal by working together on a bulk purchasing system, instead of every province and territory buying drugs for their plans separately.

“We don’t know who is paying what in one part of the country compared to the other sometimes, and I think to some extent we are getting ripped off,” Ambrose said.

“Let’s get together and start working on a bulk purchasing program that leads to the discussion around pharmacare.”

Canada currently has one of the most expensive systems for purchasing prescription drugs in the world, Morgan said.

“Because we don’t have universal coverage, we don’t exercise the buying power that Canada could exercise in world markets for pharmaceuticals,” Morgan said.

The study was possible because more detailed information about use and cost of different types of drugs by private health plans, public drug plans and out-of-pocket sources was published in the latest edition of the Canadian Rx Atlas, a compendium of drug-spending data.

The researchers pointed to three categories of potential savings:

In 2013, the provinces and territories announced a joint deal on six generic drug purchases.

Of drug costs in Canada, 36 per cent were funded through private insurance plans such as those provided by employers, four per cent came through compulsory social insurance such as workers’ compensation funds and 22 per cent were funded out-of-pocket by patients between 1975 and 2013, according to the Canadian Institute for Health Information. The rest is mainly funded by public provincial plans.

Study co-author Danielle Martin, a family physician and vice-president of medical affairs and health systems solutions at Women’s College Hospital in Toronto, is also a panellist on CBC-TV’s The National and a volunteer member of the board of Canadian Doctors for Medicare.