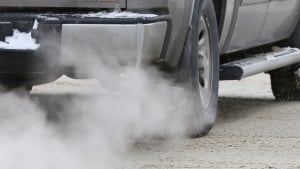 About 21,000 premature deaths are attributed to air pollution in Canada each year, according to the Canadian Medical Association. The detrimental effects of air pollution on cardiovascular deaths and lung effects are well documented and now researchers are looking at its effects on the brain.

Car exhaust contains pollutants such as nitrogen dioxide that were measured at schools in Spain. (Yvon Theriault/CBC)

To that end, Dr. Jordi Sunyer and his colleagues from the Centre for Research in Environmental Epidemiology in Barcelona, Spain, measured three aspects of memory and attentiveness in more than 2,700 primary school children every three months over 12 months.

“What was surprising for us is among our children, we see very robust, consistent effects,” Sunyer said Tuesday from Rome.

The associations between slower cognitive development and higher levels of air pollutants remained after the researchers took factors such as parents’ education, commuting time, smoking in the home and green spaces at school into account.

The researchers measured air pollutants from traffic twice both in the school courtyard and inside the classroom for schools with high and low traffic-related air pollution. Pollutants from burning fossil fuels, carbon, nitrogen dioxide and ultrafine particles, were measured.

Sunyer called on politicians to understand and act on how air pollution can be harmful to the developing brains of children, given that one of the cognitive measures studied – superior working memory – is a good predictor of learning achievement.

The findings have important implications for Canadian children, said environmental health Prof. Ryan Allen of Simon Fraser University in Burnaby, B.C. His researchers have found more than one-third of public elementary schools in Canadian cities are located within 200 metres of a highway or major road, a distance where he said traffic-related air pollutants are significantly elevated.

“The best long-term strategy is to reduce the amount of pollution that is produced in the first place,” Allen said in an email. “We should also take environmental pollution into account when selecting sites for new schools. For example, legislation in California prevents the construction of new schools within 150 metres of a freeway.”

The study was funded by the European Research Council.