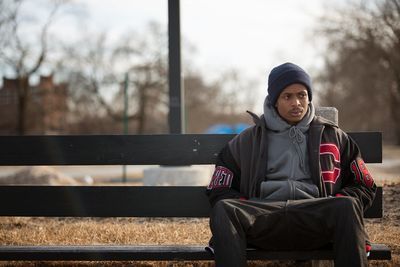 Home. As I sit here typing this review in my home and you read it from your home, we all know what it is like to have a home. When asked what home is, some may answer, “Home is where I lay my head to fall asleep every night, wake every morning, and eat most of my meals” and we may even add “with my family.”

In “The Homestretch,” filmmakers Kristen Kelly and Anne De Mare follow three homeless teens in their quest to be better and achieve more than they have been given. These teens take the phrase “home is where the heart is” to a new level.

Opening with a beautiful sunrise, the film engages the viewer instantly. The settled tone matches the personality of the first person introduced in the film, Roque, a Hispanic 17-year-old boy whose parents have not been very active in his life. His father had problems with immigration and his mother has never been there for him in the ways a mother should. His teacher, Maria Rivera, noticed Roque’s inconsistency in a place to sleep when she started dropping him off at home after school. Rivera reveals a little bit of her back story. She explains how when she was younger, her mother was not the best, and she often found herself sleeping at someone else’s home; and even in those situations, she was still treated poorly. Rivera takes Roque under her wing and allows him to live with her and her family, while also motivating him to graduate and attend college. Roque’s story is very inspiring in a way that emphasizes the impact of teachers and schools on student’s lives.

Another person followed in this film is Kasey, who was rejected by her mother because she is a lesbian and was verbally abused when she moved in with her grandmother. She resides in a homeless shelter for teens who are trying to build their lives and live on their own. Kasey’s lively attitude and smiling face is a façade. As the documentary progresses, the damage of being homeless and rejected by her family is more evident as her behavior becomes more self-destructive. Kasey mentions multiple times that she wants to go to college after her graduation but never takes any real steps toward achieving those goals. Kasey represents the part of homelessness that answers the question of whether people are able to recover from the traumas that made them homeless. The sad answer to this question shown through Kasey is no.

Finally, there’s Anthony. His attitude is inspiring and heart-warming. Aware of his goals and very determined to achieve them, Anthony’s back story of an abusive family and foster care homes does not deter him. I personally have never seen a person with such extreme circumstances have such an optimistic view on life and the determination to make things better. He fights hard and long, working two jobs, studying to get his GED, earning his own apartment, fighting to get his son out of the foster care system, and joining a one-year program to help people transition into college. Anthony’s story of perseverance is the most inspiring of them all.

This documentary was not only informative because of the staggering facts about teen homelessness in Chicago and the too-few institutions that support them, but it was also motivational. Roque, Kasey and Anthony share a unique story, and within each story I learned something new. Home is not about where you physically are; it’s a mental state. These teens find their home within themselves. We can all learn something from their experiences.