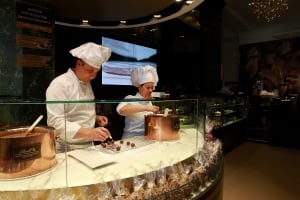 A Sydney cafe that was the site of a deadly siege reopened on Friday, with a staffer who was held captive for 16 hours returning to work in a bid to heal.

The Lindt Cafe’s reopening comes three months after gunman Man Monis, an Iranian-born, self-styled cleric, took 18 people inside the cafe hostage and made a series of demands, including that he be delivered a flag of the Islamic State of Iraq and Syria (ISIS) group.

The standoff ended after police stormed the cafe in a barrage of gunfire, killing Monis. Two hostages were also killed; one by fragments of a police bullet, and one who was shot by Monis.

Cafe worker Joel Herat, who survived the siege, was behind the counter when the doors opened, wearing his signature Lindt apron.

“It was extremely important for me to be here and support Lindt and support the people I work with,” Herat told the Australian Broadcasting Corp. “Working with these people here, it’s helped a lot in the healing process.”

Plaques dedicated to the two victims, 38-year-old attorney Katrina Dawson and 34-year-old cafe manager Tori Johnson, were installed as permanent memorials inside the cafe, which was otherwise a festive spot on Friday. Hundreds of customers lined up to get inside, chefs stirred vats of molten chocolate and colourful clusters of chocolate Easter bunnies and other holiday treats crowded the shelves.

Steve Loane, Lindt Australia’s CEO, said in a statement that reopening the cafe was the right thing to do, and New South Wales state Premier Mike Baird said it symbolized the importance of moving forward.

“It’s a difficult day, but in many respects a hopeful day,” Baird said. “The city was tested, it was challenged, but today is a strong reminder that we march forward.”

Many customers felt the same.

“You’ve got to come here united,” said Praveen Swarup, who was first in line. “This is the best way to overcome an incident like what we had.”