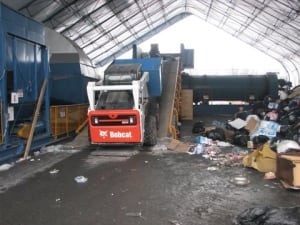 A garbage incinerator that ran for months on a Six Nations Reserve was found to have spewed out toxins and carcinogens at levels up to 200 times the provincial limit, according to a report obtained by CBC Hamilton.

The report, completed by an engineering firm in November 2014, says the prototype of $4.8-million garbage “Disintegrator,” which promises zero emission, released 200 times the Ontario limits of dioxins and furans, 25 times the limit of lead and cadmium, as well as above-standard levels of carbon monoxide and nitric oxide.

‘I have a two-year-old, one-year-old and newborn at the house. Will that stuff be in their system?’- Derek Sandy, Six Nations resident

Protesters who stopped the initial trial run of the Disintegrator say their elected band council is “too proud” to go back on their decision to purchase the machine. They have also called for resignations of SNEC elected staff, including that of Chief Ava Hill, who did not return repeated requests for interviews since January.

“That thing was a disaster,” said Derek Sandy, one of many who protested the machine in June to stop unit from running after black smoke could be seen during the trail period. “I tried to go to band council and tried to talk to them myself…They didn’t want too hear us.”

Six Nations Elected Council (SNEC) purchased the Disintegrator in an attempt to solve an ongoing waste crisis in Oshweken, located 25 kilometres southwest of Hamilton. Their current 40-year landfill is unlined, and was filled up in 2006 after roughly 20 years. Since then, garbage has been piling on at a previously reported rate of 120 tonnes per month.

The Disintegrator promised to burn the garbage and emit no emissions, using the waste as its fuel. Nova Scotian John Kearns invented the unit 30 years ago, but Six Nations was the first municipality to purchase the machine, which promised to burn all kinds of waste, with no need to recycle, into elemental inert ash creating zero emissions.

A three-day test of the Disintegrator completed in November 2014 showed the promise of zero-emission garbage burning was a fallacy.

The community is now expected to meet on March 19 to discuss the report, which SNEC has had since late January but has yet to release.

Chief Hill, SNEC senior administrative officer Dayle Bomberry and inventor Kearns declined to speak with CBC Hamilton about the report. Previous phone calls to councillor Hellen Miller, whose ward the Disintegrator is in, as well RWDI Engineering, which completed the report, were not returned.

The report found that there were 200 times the allowable limits outlined in Municipal Waste Thermal Treatment Facilities of dioxins and furans. The chemicals are known carcinogens, which Health Canada says also cause developmental and reproductive problems, as well as liver and skin disorders.

The SNEC paid $480,000, one-tenth of the asking price of $4.8-million for the machine, to bring a loaner unit to the reserve from Nova Scotia.

It ran for five months at the beginning of 2014 before a community group protested the Disintegrator, stopping the machine after seeing black smoke and smelling burning plastic.

Brian General operates a store across the street from the landfill on the Six Nations reserve. In January he said when the Disintegrator was testing, it was easy to smell “burnt garbage.”

“It gets pretty bad some days. Some days it’s just a haze around here,” General said. “It’s supposed to have no fumes and zero pollutants coming out but seems like some days it’s pretty hazy.

“I’m not exactly sure how that thing is supposed to work,” General added. “As a business across the road, it is hazy. You can see smoke across the road.”

Sandy, meanwhile, wants Six Nations to focus more on recycling efforts. But after months of smoke, and silence from SNEC, he wants answers about the any potential health problems for future generations.

“I have a two-year-old, one-year-old and newborn at the house. Will that stuff be in their system?” Sandy said.