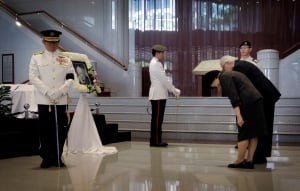 Thousands of people lined Singapore’s streets on Wednesday as a gun carriage took the casket of Lee Kuan Yew, the founding father of modern Singapore, to Parliament House for public viewing.

Chants of “Lee Kuan Yew” rang out from the crowd as the carriage entered the colonnaded Parliament House in the heart of the city-state’s business district, where his body will lie in state until Saturday. The funeral is on Sunday.

The casket, wrapped in the Singaporean flag, was brought from the Istana palace, where the Singapore prime minister’s office is located and the Lee family held a private wake for the last two days. Bagpipers played Auld Lang Syne as the procession set off.

Singapore’s President Tony Tan, and his wife Mary Chee, bow to pay their respects to the late Lee Kuan Yew at the Parliament House where he will lie in state for four days. (May-E Wong/The Associated Press)

Lee, Singapore’s first prime minister, is credited with transforming the city-state from a British colonial outpost into one of the world’s wealthiest nations on a per capita basis with a strong, pervasive role for the state and little patience for dissent.

“Many people found he was a bit stern. But in order to lead, you have to be a little stern,” said Mariam Mohammed, 52, who was in the line outside Parliament House with her family. The queue of people waiting to enter stretched for about two kilometres, across a bridge on the nearby Singapore River and into the Boat Quay area.

A florist at the closest subway stop was offering free flowers to people on their way to the viewing.

“This is the last opportunity,” Mohammed said. “I would love to have met him in person to thank him personally. But I hope he knows we are grateful for what he has done.”

The hour-long procession from the Istana to Parliament House was organised with Singapore’s customary attention to detail. Information about road closures was detailed through social media and the Land Transport Authority’s website, with minimal disruptions to traffic outside the procession area.

Soldiers wearing white shirts and black armbands were managing the crowd – keeping the line in order and passing out bottled water. Portable toilets were also put in place.

Hundreds of people came out of their offices to watch live television coverage of the procession on a giant screen set up in a square in the central business district.

“I think it’s important for my son to understand the country’s history, the history of somebody who started the country and brought it to today,” said Nadim van der Ros, a 37-year-old businessman and husband of a popular singer. He and his two-and-a-half year old son had been in line outside parliament for an hour.

“We will talk about it when he is older and can understand it.” 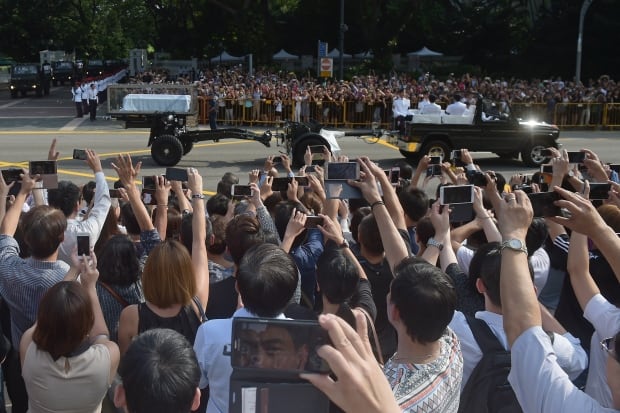 Members of the public take pictures and shout “Thank you, Mr Lee!” as the coffin of Singapore’s founding father Lee Kuan Yew leaves Istana, the presidential palace, on a ceremonial gun carriage to lie in state at parliament on Wednesday. (Joseph Nair/The Associated Press)