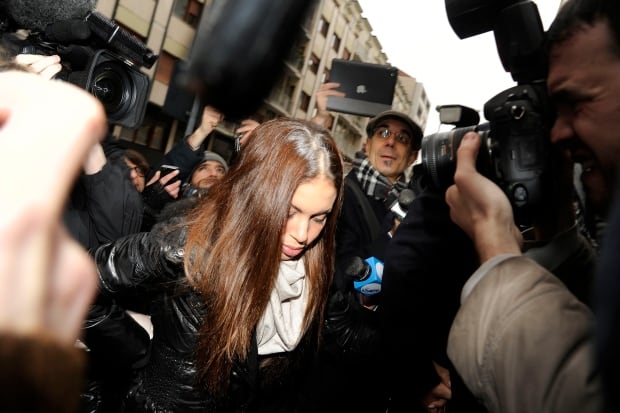 Italy’s highest court was hearing Tuesday what could be the final appeal in former Premier Silvio Berlusconi’s infamous “bunga-bunga” case.

The Court of Cassation will decide whether or not to make final Berlusconi’s acquittal by an appellate court on charges of paying for sex with an underage prostitute during sex-fueled parties at his Milan villa, and using his influence to cover it up. A lower court had convicted the three-time former premier of both charges, and sentenced him to seven years.

A decision is expected later Tuesday.

Prosecutor Eduardo Scardaccione urged the court to throw out the acquittal, saying there was no way Berlusconi didn’t know the age of the Moroccan teen at the centre of the accusations, Karima el-Mahroug, after she spent so many evenings at his Milan estate. He said Berlusconi’s closest aides knew she was only 17 at the time of their encounters.

Moroccan-born Karima El-Mahroug was at the centre of a sex trial against Berlusconi. (Giuseppe Aresu/AFP/Getty Images)

Berlusconi also used his influence to get her out of police detention when she was picked up for theft, a brush with the law that threatened to expose their relationship, Scardaccione said.

A police official who released el-Mahroug “couldn’t resist the pressure” when the then-premier called him at home, the prosecutor said.

Defence attorney Franco Coppi argued there was no proof Berlusconi knew el-Mahroug’s age before her detention, saying he strongly rebuked her for having lied when he learned the truth.

Coppi said Berlusconi’s call to the police official contained no threats “explicit or implicit” and that it was merely aimed at avoiding a diplomatic incident since he believed that el-Mahroug was related to the former Egyptian president Hosni Mubarak.

Berlusconi last week completed his community service stint for a tax fraud conviction that also cost him his seat in parliament. He immediately threw himself back into politics, jockeying his Forza Italia political party for alliances ahead of regional elections in May.

His legal woes won’t be over no matter what the high court decides. Milan prosecutors are also investigating him for allegedly paying off witnesses in the ‘bunga-bunga” trial.