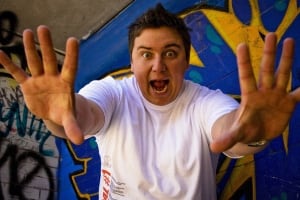 The Anishinaabe/Métis comedian looks at racism, sterotypes and colonization.

Currently McMahon is in the process of developing a new hour-long comedy special called Reconcili-Nation, which will be touring this fall.

He’s in Thunder Bay as part of Aboriginal Awareness Week, and will give a performance at Lakehead University on Friday night.

Ryan McMahon is a comedian, an activist, and the host of the popular podcast Red Man Laughing. McMahon has appeared in a number of CBC-TV comedy specials. (Fort Edmonton Park )

McMahon recently promoted the art of aboriginal storytelling as part of the annual Sakewewak Storytellers Festival in Saskatchewan. Last Thursday, he was at the University of Regina where he hosted a storyteller’s workshop.

He told the Regina Leader Post that he developed an interest in storytelling after he finished his theatre degree in 1999.

“I started learning more about my culture,” McMahon was quoted as saying.

“My family has that common story that many others share about residential school. I wasn’t raised with language, culture and ceremony.”

He went on to say that storytelling is an essential part of First Nations culture and it’s time to revive that way of teaching.

“A lot of people say, ‘Laughter is medicine. Laughter is healing.’ While I agree with that to a certain point, I think it’s so much deeper than that and, by leaving it there, it almost robs us of something.”

McMahon is host of the popular podcast Ryan McMahon Gets Angry  — an audio segment that’s done in one take, without edits.

The podcast is “a forward looking, smart and angry-ish look at the world through the lens of a Native guy trying to make sense of it all.”

McMahon is also host of Red Man Laughing, a podcast that was adapted into a national comedy special for CBC Radio One and is currently in development for a television variety show series.