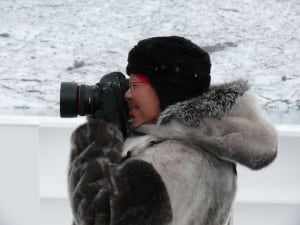 It was by chance that Camille Seaman first travelled north — a bumped flight on Alaska Airlines led to a free trip to Kotzebue on the Bering Strait.

Little did she know it was the beginning of a decade-long quest, an unshakable compulsion to photograph icebergs in some of the most extreme environments on earth.

At the time, she simply wanted to document beauty, in visually stunning vistas of the Arctic and Antarctica.

She wasn’t thinking about climate change then, but as the newest artist-in-residence at Denali National Park, it’s top of mind now. On her last Arctic sailing, she says there was almost no ice.

“There was nothing on the radar for ice,” she said. “We could have kept going [to the North Pole], if we had enough fuel. It just shouldn’t be.”

Part Native American, Seaman attributes her environmental awareness to her childhood spent near the Shinnecock Reservation in New York State, and especially to the teachings of her grandfather.

He would take her for long walks in the woods to introduce her, individually, to trees.

“He really required that you stop at each tree and acknowledge it physically. Place your hands on it, and feel its life force, its physical structure, and understand it’s a relative to you.”

‘It’s painful to see the devastation … to know what is being lost, and what we may not get back.’- Camille Seaman

She later brought her grandfather’s sensibilities to her polar art.

While working as an expedition photographer aboard science vessels and commercials ships, she approached each photograph of an iceberg as if it was a portrait of an ancestor: “I’ve never met two which were alike.”

She compiled those photos and stories in a new book titled Melting Away.

Though she stopped her polar explorations in 2011 — “I acknowledge I’m part of the problem” — she jumped at the opportunity to visit Denali because she sees Alaska as one of the front lines of climate change in America.

“No one can deny what Alaskans are experiencing and witnessing first-hand.”

“I can’t say making a photo is very important. In fact I feel sad it’s all I can do. But that’s what I’m gonna do.” (Camille Seaman)

There’s no debate among scientists that climate change is altering the park’s landscape  — from forests of so-called “drunken trees” leaning against each other as permafrost thaws, to treelines creeping up the mountainside which affect habitat of the iconic Dall sheep.

Of course, there’s also Alaska’s retreating glaciers, which Canadian glaciologist Joanna Young views as canaries in the coal mine.

“They are a great metric to show us that climate change is real and that these changes are happening at an accelerating rate,” said Young, who works at the University of Alaska.

“Once society realizes this is a real issue, we can start thinking more along the lines of mitigation and adaptation.”

Camille Seaman will be fresh off her residency at Denali National Park when she arrives in Vancouver in March, to attend the 2015 TED (Technology, Entertainment, Design) Conference.

She was named a Senior TED Fellow, after her popular talks featuring her photos of icebergs and storm chasing.

Watch Duncan’s feature story about Camille Seaman and her polar photography tonight on CBC’s The National.