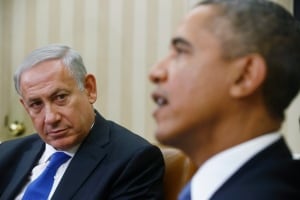 U.S. President Barack Obama said Tuesday that the U.S. is weighing whether to back Palestinian efforts to seek UN recognition for an independent state and that recent remarks by Israeli Prime Minister Benjamin Netanyahu dim hope for a negotiated two-state solution.

Obama’s comments at the White House did little to repair rocky U.S.-Israeli relations, which were aggravated by a Wall Street Journal report Tuesday alleging Israel spied on sensitive negotiations about Iran’s nuclear program. The report said Israel acquired information from confidential U.S. briefings and other means and shared it with members of Congress to build a case against making a deal with Iran, which has threatened to destroy Israel.

Netanyahu is feuding with the White House over an emerging deal with Iran and also has come under fire for comments he made in the final days of Israel’s election last week. Netanyahu ha voiced opposition to Palestinian statehood and warned his supporters that Arab voters were heading to the polls “in droves.”

Netanyahu has since backtracked on his campaign statements, but the White House has reacted with skepticism.

‘Took him at his word’

“Netanyahu, in the election run-up, stated that a Palestinian state would not occur while he was prime minister,” Obama said. “And I took him at his word that that’s what he meant.

‘We can’t continue to premise our public diplomacy on something that everybody knows is not going to happen, at least in the next several years.’- U.S. President Barack Obama

“Afterwards, he (Netanyahu) pointed out that he didn’t say ‘never,’ but that there would be a series of conditions in which a Palestinian state could potentially be created,” Obama said. “But, of course, the conditions were such that they would be impossible to meet any time soon.”

Obama said he is evaluating U.S. policy on the Israeli-Palestinian conflict. But he said that in light of Netanyahu’s comments, the “possibility seems very dim” for the Israelis and the Palestinians to agree to live side-by-side in peace and security.

Obama says he has a ‘businesslike relationship’ with Netanyahu and has met with him more than any other world leader. (Charles Dharapak/Associated Press)

“We can’t continue to premise our public diplomacy on something that everybody knows is not going to happen, at least in the next several years,” the president said.

Obama also said his disagreements with Netanyahu over Iran and the Palestinians shouldn’t be framed as a personal issue. He said he has a “businesslike relationship” with Netanyahu and has met with him more than any other world leader.

“This can’t be reduced to a matter of somehow let’s all, you know, hold hands and sing `Kumbaya,”‘ Obama said. “This is a matter of figuring out how do we get through a real knotty policy difference that has great consequences for both countries and for the region.”

Fractures in the U.S.-Israeli relationship recently have been played out at the U.S. Capitol.

Obama was upset when House Speaker John Boehner didn’t consult with the White House before inviting Netanyahu to give a speech to Congress just as the Iran nuclear talks were approaching a critical juncture. Some Democrats skipped the speech in which Netanyahu boldly warned that an emerging nuclear deal with Iran would not prevent it from developing nuclear weapons, but pave Tehran’s path to the bomb.

The U.S. has been leading world powers in negotiations aimed at curbing Iran’s nuclear program. The so-called P5+1 group — Britain, China, France, Russia and the United States plus Germany — is rushing to craft a framework for a deal to prevent Iran from developing nuclear weapons in exchange for relief from sanctions before a deadline expires at the end of the month.

Netanyahu’s office called the spying report “utterly false,” saying Israel “does not conduct espionage against the United States or Israel’s other allies.”

“All the information we obtained is from a different side and not through the United States,” Lieberman told Army Radio.

At a news conference on Afghanistan, Obama said he didn’t want to comment on other nations’ intelligence, but said, “We have not just briefed Congress about the progress, or lack thereof, but we also briefed the Israelis and our other partners in the region.”

When asked about the allegations that Israel spied on the nuclear talks, senior senators said they never gleaned any details from the Israelis that they didn’t already know or hadn’t learned in briefings by the Obama administration.

According to The Wall Street Journal, the Israeli officials did not spy directly on American negotiators, but obtained details through other means, including close surveillance of Iranian leaders who were being told the latest deals being offered by U.S. and European officials. The paper said European officials, particularly the French, have been more transparent with Israel about the closed-door discussions than the Americans.