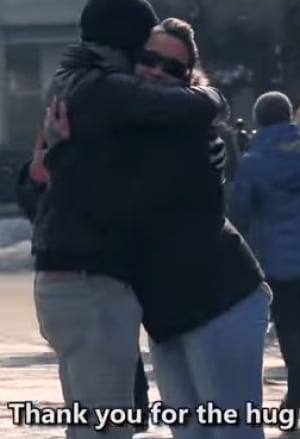 Are New Yorkers as tolerant as some Torontonians? That’s the question a New York actor attempted to answer as he re-created a Canadian social experiment aimed at breaking down barriers and raising awareness about Islamophobia.

The premise: A young Muslim man stands in a public square, blindfolded. Beside him a sign that reads “I’m Muslim and I Trust You. Do You Trust me Enough for a Hug?”

It’s based on a video shot in January in Toronto’s Yonge-Dundas Square. Called the Blind Trust Project, it was created by activist Asoomii Jay in response to recent hate crimes and bullying against Muslims. In her video, the subject stood between two signs. One read:  “I am a Muslim I am Labelled as a Terrorist”, the other read “I trust you do you trust me? Give me a hug.”

In the three-minute video some passersby stare, others take photos. But many more stop and give the man a hug. The huggers are young and old, male and female and from various ethnic backgrounds. The Toronto video has more than 1.8 million views on YouTube.

Can’t see the video? Check it out here.

So would New Yorkers be as open? Actor Karim Metwaly stood in public in Manhattan on a chilly afternoon. Watch and see what happens next:

Can’t see the video? Check it out here.

While at first he seems a curiosity, eventually people make their way over and give him a hug.

“I’m Muslim too, peace be upon you,” says another.