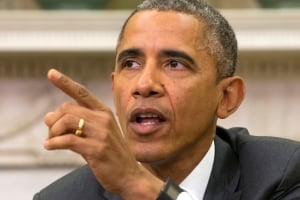 Benjamin Netanyahu stood before American lawmakers on Tuesday, but the real audience for his controversial address to Congress may have been here in Israel, where a close election campaign has entered its final two weeks.

Case in point: the speech was timed so Israelis could watch their prime minister on TV as they sat down for dinner last night.

Hours of political punditry followed on Israel’s radio and television networks. It’s the kind of political attention most leaders only dream of.

Netanyahu knew that the visual of giving a strong performance in the United States would play well in Israel. He’s seen  here — even by many of his critics — as the leader who can best keep Israel safe from the many threats in the Middle East, whether it’s Iran, Hezbollah in Lebanon or the ever-encroaching Syrian conflict.

U.S. President Barack Obama said Netanyahu didn’t offer any ‘viable alternatives’ to the nuclear negotiations with Iran during his speech to Congress, and yet Israeli political observers considered it a success. (Jacquelyn Martin/Associated Press)

The Israeli prime minister has been successful in focusing the election campaign on security issues — his strength by far — while deflecting mounting criticism that his government has done little to ensure the country remains an affordable place to live.

Netanyahu has been beating the drum against Iran for years. His speech to Congress used much of the same language and the same arguments the prime minister has come to depend on.

Analysts and even American president Barack Obama charged that Netanyahu provided no alternatives to the negotiations under way with Iran, led by the major world powers.

Still, the speech is regarded by most Israeli political observers as a success.

“Netanyahu is a political genius, mostly in terms of everything that is related to his personal survival,” wrote longtime Netanyahu critic Ben Caspit in Ma’ariv, one of the biggest daily newspapers in Israel.

The question is, at what price?

The consensus in Israel is that the prime minister’s trip to Washington caused even more damage to the already-frayed relationship between the two countries — particularly between the leaders.

‘We will protect Israel against a nuclear Iran by working together with our allies, and with our best friend the United States of America and not against it.’- Isaac Herzog, Israeli opposition leader

Netanyahu “went to speak to Congress, ignoring the warnings, publicly hazed the president and burned the last bridges that remained between himself and the White House,” Caspit wrote.

“As prime minister I will totally be committed to assuring that Iran never develops a nuclear weapon,” said opposition leader Isaac Herzog after the speech.

Where the parties diverge is on how to deal with that threat.

“We will protect Israel against a nuclear Iran by working together with our allies, and with our best friend the United States of America and not against it,” Herzog said.

The Israeli election campaign remains tight. Herzog’s Labour party has teamed up with former foreign minister Tzipi Livini. Their block was just two seats ahead of Netanyahu’s Likud party in a poll done for Israeli Army Radio and released this week.

But with the election less than two weeks away, analysts suggest Netanyahu could enjoy a surge in support from undecided voters who may be swayed by the message that Iran is an existential threat to the Jewish state.