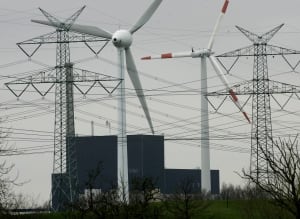 Despite the stereotype of a business lobby warning about the prohibitive costs of cutting back on greenhouse gases, there are increasing signs that capitalism and market forces are actually rescuing us from climate change.

Surprising new data from the International Energy Agency shows that while the global economy continued to grow in 2014, the amount of carbon dioxide produced didn’t.

According to the IEA report, this is “the first time in 40 years in which there was a halt or reduction in emissions of the greenhouse gas that was not tied to an economic downturn.”

We’ve known for a while that Europe has been making steady progress toward getting greenhouse gases under control.

Led by a popular environmentalist sentiment, politically motivated governments have taken deliberate action to reduce the use of carbon based fuels.

At the same time, the Europeans have introduced regulations encouraging energy efficiency and spent billions of euros stimulating wind and solar businesses.

Here in North America, where there is a long tradition of warning that anti-climate change policies will cripple the economy, many business commentators continue to resist new regulation.

Some critics, especially those who have convinced themselves that climate change is a myth or overstated, have said the economic costs of fighting climate change would be worse than the costs of global warming itself.

A related argument says no action we can take will be effective.

The IEA study shows both those arguments are wrong. The new data shows that not only is the battle against climate change working, the result is not economic devastation.

In fact, some of the fastest-growing economies are the ones doing the most to cut back on carbon.

The IEA found that while the rich countries of the Organization for Economic Co-operation and Development grew about seven per cent over a four-year period, emissions fell four per cent. And in 2014, when global carbon dioxide production stayed constant, the entire global economy grew a fairly healthy three per cent.

The IEA says that in China, a reduction in the growth of greenhouse gas production is not just because of a decline in the economy from double- to single-digit growth, but also as a result of deliberate policy decisions.

“In China, 2014 saw greater generation of electricity from renewable sources, such as hydro power, solar and wind, and less burning of coal,” says the IEA.

In the Financial Times, environment correspondent Pilita Clark warns that there is a danger the latest data could be a blip. She says that as poor countries try to catch up by building coal-fired power plants, their carbon emissions will continue to grow.

“This is especially important in fast-growing economies that are home to the 1.2 billion people without access to electricity, including India,” writes Clark. When the electricity grid failed across northern India on July 30, 2012, transit systems were shut down and millions of people had no electricity in one of the worst power failures of the previous decade. (Associated Press)

“A quarter of India’s population is not connected to the power grid, and electricity supply is chronically short for those who are,” says Peter Fairley in The Review.

The great thing is that the capitalists aren’t just doing it for the sake of the planet, though that may be part of the personal motivation for those who work at these companies. They are in it for the profit.

With startup encouragement by governments, (including the government of Ontario, much maligned by critics for its solar subsidies) the cost of producing electricity with solar has plummeted. In India, solar can actually match or beat other sources of power.

“In some Indian states, renewable energy can compete with fossil fuels even without the benefit of any subsidies,” says MIT’s Fairley.

Even the more expensive roof-top solar is competitive. There are a lot of roof tops in India. For a capitalist, that smells like opportunity.

Of course, capitalism is not monolithic, which is why some businesses will thrive fighting climate change while others will suffer.

Recently Bank of England governor Mark Carney was pilloried by British Conservatives for a bank analysis warning that insurers could suffer a “huge hit” if they invest in fossil fuels.

The Bank of England report found that if the world actually curbs fossil fuels to the extent that climate experts advise, the value of oil and gas assets will decline sharply.

The battle against global warming is far from won. But the IEA report is a reassuring sign that with the help of capitalism, fighting an environmental catastrophe will not necessarily lead to an economic one.