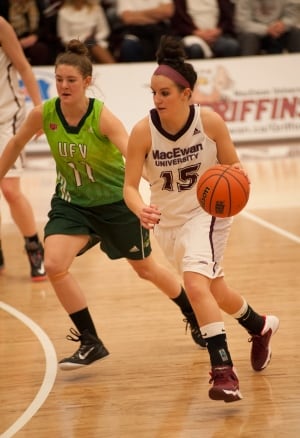 March Madness has some sports fans digging into the back of their closet for a faded college sweater or a now-too-tight t-shirt bearing beloved team colours.

That loyalty to team colours is something MacEwan University has lacked.

You had to look hard to find a maroon Griffins ball cap or foam finger anywhere, until now.

“We felt like MacEwan from a spirit perspective, an athletic brand perspective, wasn’t really out there like the University of Alberta Golden Bears might be or even the Ooks over at NAIT” says Cory Good the senior director of retail and campus services.

“This is a dedicate space to that school spirit.”

In 2013 MacEwan University became the 17th member of the Canada West Universities and Colleges of Canada (AUCC).

But Griffins Landing is just the beginning of a plan to expand campus retail in what’s become a prime location sandwiched between the emerging distillery and arena districts in the downtown core.

On the old CN rail yard

MacEwan President David Atkinson recalls when he first heard they wanted to put the school on the old CN rail yard property back in the 90’s. 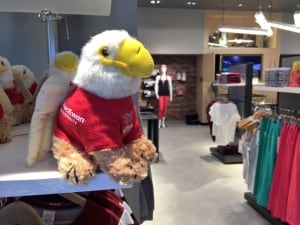 “I remember thinking this is the craziest thing, it’s just sitting here, in the middle of nowhere.”

“We actually own eight blocks of this expansion so we’re the biggest game in town.”

And he says the timing couldn’t be better with the new Centre for Arts and Culture set to open in 2017.

Already, another 18,000 square feet has been set aside in the complex for a full-service restaurant and an upscale art supply store.

To see more from MacEwan University watch this week’s edition of Our Edmonton. The weekly magazine show airing on Saturday at 10 a.m., Sunday at 3 p.m. and Monday at 1 p.m. on CBC TV.