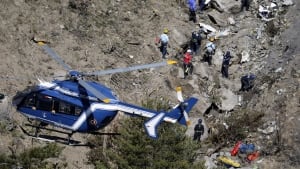 French aviation investigators said Tuesday they will examine “systemic weaknesses” like cockpit entry rules and psychological screening procedures that could have led to the Germanwings crash, while Lufthansa said its insurers set aside $300 million US ($380.7 million Cdn) to deal with possible fallout from the disaster.

Authorities say co-pilot Andreas Lubitz, who in the past had been treated for suicidal tendencies, locked the captain out of the cockpit on March 24 before deliberately crashing the Airbus 320 into a mountain in the French Alps. All 150 people aboard the flight from Barcelona to Duesseldorf were killed.

The French aviation agency known as BEA said it aims to provide a “detailed analysis” of the Germanwings cockpit voice recorder information and any other flight data — but it also plans to widen its search to examine issues that could affect the worldwide aviation industry.

“(We will study) systemic weaknesses (that) might possibly have led to this aviation disaster,” BEA said in its first statement since prosecutors detailed the co-pilot’s suspected role.

The agency is studying both psychological screening procedures and rules applied to entering and leaving the cockpit in the industry, as well as cockpit door locking systems.

The BEA announcement signalled the latest re-think about airline procedures in the wake of the Germanwings crash, which jolted an aviation industry already reeling from other disasters like the disappearance of planes over the oceans and the shooting down of a Malaysia Airlines plane in eastern Ukraine.

While BEA’s findings only apply to this particular accident, if the agency discovered wider problems, that could spark aviation regulators and airline companies worldwide to make changes. This has already occurred even in the last week, with several airlines and the European aviation regulator announcing that they now recommend having two people in the cockpit at all times.

In Frankfurt, Lufthansa spokeswoman Kerstin Lau said $300 million US is the amount currently reserved by insurers to deal with “all costs arising in connection with the case.”

Last week, Lufthansa — Germanwings’ parent company — offered immediate aid of up to 50,000 euros ($68,630 Cdn) per passenger to relatives of the victims. Those payments are separate from eventual compensation payments.

Airlines are required under a treaty governing deaths and injuries aboard international flights to compensate relatives of victims for proven damages of up to a limit currently set at about $157,000 US ($199,000 Cdn) — regardless of what caused the crash.

However, higher compensation is possible if a carrier is held liable.

French gendarmes and investigators work amongst the debris of the Germanwings Flight 4U9525at the site of the crash, near Seyne-les-Alpes, French Alps. (Emmanuel Foudrort/Reuters)

German prosecutors say Lubitz, 27, received psychotherapy before obtaining his pilot’s license and that medical records from that time referred to “suicidal tendencies.” They have given no dates for his treatment, but said visits to doctors since then showed no record of any suicidal tendencies or aggression against others.

They also have found torn-up sick notes from doctors, including one that would have kept Lubitz off work on the day of the crash.

Lufthansa has declined to say whether it knew anything about Lubitz’s health problems. But it says the young pilot had passed all required medical checks since starting work for its subsidiary in September 2013.

Investigators said Tuesday they hope to have found DNA samples for everyone killed on the Germanwings flight within the next 24 hours. Lt. Col. Jean-Marc Menichini, speaking at the crash site in the Alpine town of Le Vernet, said the search was still on for the second black box.

Construction workers on Monday cut a road to the crash site to speed recovery efforts. Previously emergency workers had to rely on helicopters, which could carry only a few people or items at a time.

“It’s essential for carrying men and equipment. We can accelerate the work. It will be much easier, not to have to depend on the weather,” said Lt. Col. Philippe Sansa of the local rescue service.