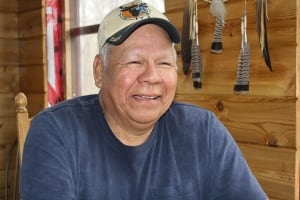 Three First Nation communities have yet to reach a deal with the province over the ongoing four-laning of Highway 69.

Chief Wayne Pamajewon of Shawanaga First Nation said he wants his community to benefit from a new interchange.

“We are not trying to hold up the development of this highway,” he said.

Chief Wayne Pamajewon of Shawanaga First Nation says he wants his community to benefit from a new interchange on Highway 69. (ammsa.com)

“All we’re saying is that we need to get a fair deal out of giving up some of our land for that [Highway 69] to be put on.”

The Minister of Transportation Steven Del Duca will give a briefing Friday on the construction progress with Sudbury MPP Glenn Thibeault.

More than 80 kilometres of road still need to be transformed into four lanes.

“We’re not against development. The only thing that we’re against is you keep coming through here and taking our land for granted, I think, and for nothing.”

Shawanaga First Nation is about to reach a settlement with the province over Old Highway 69 for about $4 million, Pamajewon added.