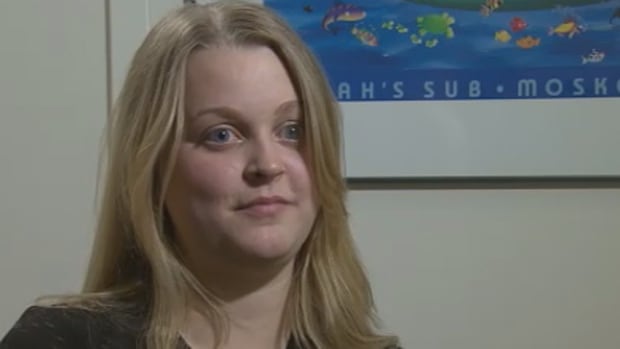 Abby Messner says the prickly sensation along the path going from the nerve from one eye to the other was welcome because it meant it was working. (CBC)

Loss of sensation in the eye that gradually leads to blindness has been prevented with an innovative technique, Canadian surgeons say.

Abby Messner, 18, of Stouffville, Ont., lost feeling in her left eye after a brain tumour was removed, along with a nerve wrapped around it, when she was 11. Messner said she didn’t notice the loss of feeling until she scratched the eye.

Messner wasn’t able to feel pain in the eye, a condition called corneal anaesthesia. Despite her meticulous care, the eye wouldn’t blink to protect itself when confronted by dust. A scar formed on her cornea, burrowed through, and formed a scar doctors feared would eventually obliterate her vision.

“Everyone was like, ‘Wow, she had a brain tumour and she’s fine,” Messner recalled. “You don’t really think that everything that is holding me back is my eye.”

Messner had to give up competitive swimming because of irritation from the chlorine, playing hockey, spending time outdoors where wind was a hazard or inside dry shopping malls.

Over time, ophthalmology surgeon Dr. Asam Ali at SickKids introduced the idea of a nerve graft to restore feeling in the eye.

“She started getting feeling back at about the two, three-month mark and that was a real surprise to her and we were very happy at that point because that was a lot faster than anything that had been reported before,” Ali said.

By collaborating with plastic and reconstructive surgeons at the hospital, the team applied nerve regeneration principles used on people with facial paralysis to the eye.

The goal was to address the root cause of the problem rather than continuing to treat complications repeatedly, such as with stitches to close the eye temporarily for relief, surgery and injections to reduce blood vessels in the cornea.

“What we’ve done in this procedure is basically bring sensation from another part of the face through an extension cord bring it across and put it into the cornea where there was no sensation,” said Dr. Ronald Zuker, a plastic and reconstructive surgeon.

“It’s like creating a new area of feeling where there wasn’t any before.”

It was less invasive than previously described surgeries for corneal anaesthesia, which involved larger facial incisions, the hospital said.

Messner said re-gaining sensation reminded her of when a foot falls asleep. “You got those tiny pricks or whatever. That’s how it felt to my eye. It would start in my right, like right where they did the first incision and it would go to my left.”

The hospital has so far done seven other cases and researchers continue to study how the nerve regenerates and its effects in the brain.