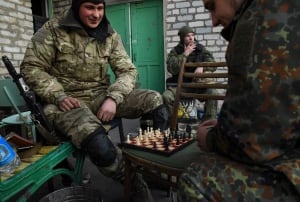 To reach rear-guard government positions in the seaside town of Shyrokyne, Ukrainian soldiers gingerly wind their off-roaders through private gardens hugging a precipice along the Azov Sea.

The truce announced in mid-February has never taken here, so traveling by the main roads is too dangerous.

Government and Russian-backed separatist forces face off in daily gun and artillery battles across an unseen line cutting through the town. The skirmishes are fierce, but contained — for now. Still, the enduring unrest arouses deep anxieties that a conflict which has already claimed more than 6,000 lives in eastern Ukraine could flare up again across the entire 450-kilometre front line.

Shyrokyne itself is not much of a prize. It is the industrial port city of Mariupol, 10 kilometres further west, that Ukrainian forces want to defend from the rebels at all costs.

Residents and government troops alike believe the separatists’ ultimate aim is to take Mariupol — and eventually create a land bridge between Russia and Crimea, which Russia annexed last March. Crimea has no physical link to Russian territory now and a bridge being discussed is years away from completion.

Government forces in Shyrokyne are only truly at ease behind three defensive lines separating them from the heat of fighting in the center. At a makeshift garrison installed there, on the grounds of a restaurant near the shore, two tanks stood parked Sunday under a striped awning.

Several hundred metres away, mortar shells landing in the sea sprayed up columns of water.

Fighters of the Azov Battalion play chess during a break in the town of Shyrokyne, eastern Ukraine. The truce announced in mid-February never made it here. (Mstyslav Chernov/Associated Press)

“They are hurling anti-tank shells at the lighthouse. Another one just came this way,” said a bearded, barrel-chested fighter with the government’s Azov Battalion who gave only his nom de guerre, Al.

As reports came that two enemy tanks had been spotted, Al’s thoughts turned to the combat ahead. “It is all about to start,” he said.

To proceed closer to the area where the battle is fiercest, soldiers abandon their cars and race on foot toward a school, climbing through a hole in the fence. The asphalt on the road had been torn up by explosives, so only armored vehicles could get through with ease.

The responsibility for defending Shyrokyne is shared between the Azov and Donbass battalions, who take weekly turns to serve in the town. Coordination is sometimes poor, however.

As Azov troops jogged for cover behind the school Sunday, one soldier shouted: “What are you doing? Are you crazy running like that? There are booby traps there.”

Another soldier corrected him. “Nah, the booby traps are over there,” he said, waving his hand vaguely to the left. “The Donbass guys put them there.”

Inside the school, children’s drawings still decorated the walls. One man fried sausages and another chowed down on boiled oats as a mobile phone blared out music by a Russian death metal band. Underfoot, amid the spent bullet cartridges and shrapnel, students’ art collages lay covered in fallen plaster.

As the sound of mortars grew more intense, all the men ducked inside for cover.

“There they go, they’ve started again,” said an Azov spotter with the nickname Mathematician.

A ceasefire between Ukrainian and rebel forces was forged after marathon negotiations between the leaders of Ukraine, Russia, Germany and France on Feb. 12. Under the truce, fighting was supposed to stop and heavy weapons were to be pulled back from the front line. Responsibility for verifying the cease-fire lies with monitors from the Organization for Security and Cooperation in Europe.

Mathematician said the rebels always wait for the OSCE teams to leave before resuming their attacks.

“As soon as the OSCE leaves, the firing starts,” he said. Separatists accuse Ukrainian forces of similar deviousness, and it’s hard to know definitely even at the front line who started any specific round of firing.

The head of the OSCE monitoring mission on Monday demanded that his teams be granted secure access to Shyrokyne. 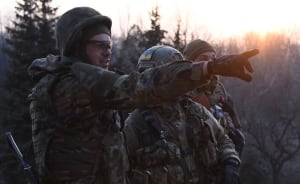 Fighters of the Azov Battalion observe enemy lines from the roof of their base in the town of Shyrokyne. (Mstyslav Chernov/Associated Press)

“Both sides in this area continue to violate numerous provisions of the (cease-fire) agreements, including those related to cessation of fire, prohibition of attacking moves, withdrawal of heavy weapons, and deployment of (airborne drones),” said Ertugrul Apakan.

Later on Sunday afternoon, sounds resembling outgoing mortars could be heard from a nearby field. Soldiers refused to give an AP reporter access to the area.

“We don’t have any mortars,” Mathematician said, smiling. “They only allow us to have small arms. But when they (rebels) get really brazen, we call in support and flatten them.”