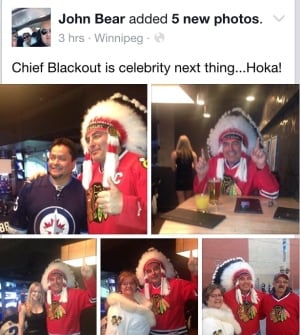 It was a much anticipated, Central Division match-up between the hometown Winnipeg Jets and the visiting team from Chicago. The MTS Centre was abuzz with our heroes fighting for their playoff lives, the closest sniff they’ve had since the team relocated from Atlanta four years ago.

Being a season ticket holder from the start, and having attended the bulk of the home games over that four-year period,

I have an emotional investment. I read all the articles. I wear a Blake Wheeler jersey. I have Jets golf club covers. We have Jets license plates.

That the Jets lost this pivotal game wasn’t my takeaway at the end of the evening. Nor was it the linesmen who became entangled with Toby Enstrom that led to Chicago’s tying goal or their heartbreaking game winning goal with a mere thirty seconds left.

The focus of the game, for me, was a fan sitting in section 109.

Screen grab of multiple images of Rob Bear posing with fans at a recent Winnipeg Jets game has since been removed by user John Bear. (Facebook)

From my seat in 113 you can’t recognize faces in that section but you could clearly see he was wearing a Chicago jersey. I don’t like it when paying customers wear opposing team’s jerseys in our barn, but I respect their right to do so (the offensive nature of the Chicago team name and jersey not withstanding).

But this fan took it one step further. He was wearing a feathered headdress – a war bonnet.

As soon as I eyes laid on it I got that sick feeling in my stomach that I’ve had countless time in my life. “You gotta be f******g me,” I muttered. I shook my head and listened to the remarks of the people around us. Even among the non-indigenous, season ticket holders there was disbelief and a sense of empathy. They understood how we felt. I guess Winnipeg’s attempt at changing its racist image has been taking hold.

Pictures were taken, more remarks made and then I tried to focus on the game. An emotional investment is one thing, the financial investment is another and be damned if I was going to let this guy be a distraction. But he was and he remained so throughout the game and beyond.

As it turns out I wasn’t the only one distracted. Other indigenous people at the game were as irate as I was and during the first intermission they tracked the guy down and spoke to him. It turns out it was his birthday and his sister put him up to wearing the headdress as a joke.

‘By wearing the headdress the guy told every non-indigenous person on Turtle Island and beyond that it was OK to do this.’- Jordan Wheeler, writer and Jets fan

And oh yeah, the guy is First Nations.

That fact floored me. It’s one thing for non-indigenous people to don headgear without knowing the context, history or sacred aspect of the headdress. It’s another for one of our own to do it. I’ve always been quick to ask restaurant and bar staffers to remove their hats with the NFL’s Washington team logo on them because I found it offensive. And they always have and with respect. To a person they have always responded the same way. “I never thought about it.”

This guy didn’t have that excuse.

We found out he’s an Operations Manager of an Indigenous owned casino in Saskatchewan. He was quick to point out a connection to a vice chief with the Federation of Saskatchewan Indian Nations (about time for that organization to change their name). As it turns out the vice chief is his sister. Suffice to say I felt a person in his position should know better. It was a joke gone bad.

I’ve been privy to news stories that involve retailer H & M removing faux headdresses from their shelves, of A Tribe Called Red asking their fans not to wear them at their shows, music festivals banning them. It’s an issue that rears its head every Halloween and the argument remains the same. The headdress is a sacred piece of regalia and wearing one is an honour few people achieve. When they do, it involves sacred ceremony.

This guy isn’t a chief and based on the beer in his hand when the television broadcast cut to him during the game, he isn’t a medicine person either. He hasn’t earned the right. And he was cognizant of that when he pointed out that his headdress didn’t have real eagle feathers. But it doesn’t matter. Damage has been done.

‘An indigenous person wearing a headdress at a sporting event does not help the argument that offensive team names should be changed.’- Jordan Wheeler, writer and Jets fan

The Jets lost and in the aftermath, grumpy about the score and irate about the headdress, I did one of the things I do best. I took to social media. By wearing the headdress the guy told every non-indigenous person on Turtle Island and beyond that it was OK to do this. Indigenous people perpetuating stereotypes are just as bad as non-indigenous people who do it. It’s the proverbial arrow in the back to all members of our community who work hard for change.

The vast majority of the respondents on social media agreed with me. A few didn’t suggesting that we have bigger issues to deal with than someone wearing a headdress to a hockey game. And we do, but the sum of the parts make up the whole. An indigenous person wearing a headdress at a sporting event does not help the argument that offensive team names should be changed.

You expect this behaviour from non-indigenous people at tailgate parties in Washington, at baseball games in Cleveland and Atlanta. But for an indigenous person to do this in a city recently proclaimed the most racist in Canada?