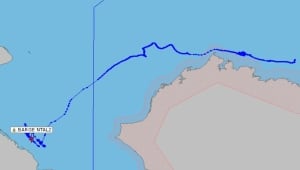 Questions are being raised about whether a barge that went adrift on its way to Tuktoyaktuk, N.W.T., last fall will be retrievable by its owners, after drifting sea ice brought it close to Russia’s northeast coast.

Canadian shippers Northern Transportation Company Limited, the owners of the barge, say they’ll retrieve it in the summer, once the ice encasing it has melted. However, the United States Coast Guard says that doesn’t mean it will be an easy rescue.

“There is a challenge dealing with Russia, as far as the current state of communications between the U.S. and Russia,” says Commander Shawn Decker of the Coast Guard. “That includes Canada.”

The path of the barge, which went adrift en route to Tuktoyaktuk, Northwest Territories. (Submitted by Marine Exchange of Alaska)

The barge has travelled about 2,200 kilometres so far. A makeshift GPS tracker dropped onto the barge by the Marine Exchange of Alaska shows that it is currently approximately 42 kilometres away from Russia, and experts say its possible currents could bring it crashing into the coast.

That, according to Arctic policy expert John Higginbotham, would be a major problem for NTCL, particularly given Canada’s tough stance on Russia’s military movement in Ukraine.

“I don’t think it’s going to be a case of tossing the ball over your hedge to your neighbour,” says Higginbotham, a Senior Distinguished Fellow at Carleton University. “If the Russians don’t want to give it back, they won’t give it back.”

The fact that the barge is unmanned also raises the possibility of another individual or group claiming the barge. In maritime law, salvage rights state that recovering another person’s ship or cargo after they were lost at sea entitles the finder to a reward, meaning that enterprising souls could claim the barge.

“You could hold on to the vessel until such time as an appropriate reward is given to you,” says maritime lawyer Chris Giaschi. 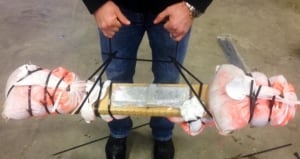 NTCL could take would-be salvagers to court, which may dissuade the practice. Peter Swanson, a Vancouver-based lawyer, says he hasn’t seen too many salvage cases in Canada’s courts because “the courts have not been overtly generous in salvage rewards.” Most salvages, explains Swanson, are done through a contract basis between the ship’s owner and the salvagers, with terms and payment amounts agreed upon beforehand.

However, locating the barge may soon become far more difficult. The GPS locator placed on the boat by the Marine Exhchange of Alaska was a makeshift unit made at a cost of approximately 500 dollars, and the Coast Guard says the signal is getting weaker and may soon die.

NTCL declined comment on the barge, offering a short statement saying they plan to retrieve the barge in July.