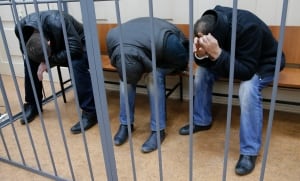 The main suspect in Russian opposition politician Boris Nemtsov’s killing has signs of torture on his body and was forced to confess to the shooting, a human rights activist said Wednesday.

Zaur Dadaev was arrested in Ingushetia, a region in the North Caucasus, on Saturday and taken to Moscow, where he was formally charged along with another suspect, Anzor Gubashev.

Russian state-controlled media reported earlier this week that Dadaev had confessed his guilt in a verbal statement, though the judge residing over his first hearing said that confession was not made in court.

Andrei Babushkin, a member of Russia’s Human Rights Council, told The Associated Press that he visited the detention centre where main suspect Dadaev had been held on Tuesday.

Babushkin said there were abrasions on Dadaev’s body and that he had been “tortured by those who detained him” and later taken to the Investigative Committee, where “he was forced to confess.”

In an interview published with the newspaper Moskovsky Komsomolets by journalist Eva Merkacheva, Dadaev said that he had been detained for two days with a bag over his head.

“They shouted at me all the time: ‘Have you killed Nemtsov?’ I told them, ‘No’,” he was quoted as saying.

When investigators told him that a friend who had been detained “would be released if I confessed, I agreed. I thought they would save him, and that I would be brought to Moscow alive.”

Russia’s Investigative Committee said in a statement that Babushkin and a journalist accompanying him had been allowed to visit Dadaev’s prison cell only to see the conditions under which he was being held, but had broken the law by publicizing details about the case.

“Such actions may be regarded as interference in the investigation,” the statement said.

The committee said that this was “a violation not only of the rules (of visiting rights) but also of the law,” and said that both Babushkin and the journalist would be questioned by investigators.

The committee, however, didn’t confirm or deny Babushkin’s claims that Dadaev had been mistreated.

Three unidentified men remain jailed for their involvement in Nemtsov’s killing, but have not been charged. (Maxim Shemetov/Reuters)

Gubashev also continues to maintain his innocence. Both men are Muslims and Russian state-controlled media have suggested that the pair may have targeted Nemtsov because he publicly condemned the killing of 12 people at the offices of French satirical newspaper Charlie Hebdo in January.

Nemtsov was gunned down on Feb. 27 as he walked across a bridge in Moscow, just a few hundred metres from the Kremlin.

Dadaev was a senior officer in the police force of Chechnya and a close ally of Chechen leader Ramzan Kadyrov.

Some observers say the charges laid against the pair, as well as the arrest of three other men from the North Caucasus who remain jailed in connection with the murder but have not been charged, could strain the Kremlin’s relations with Kadyrov, who has run Chechnya like his own fiefdom while relying on federal subsidies.

In the wake of the attack on Charlie Hebdo in Paris, Kadyrov called those who defended the satirical magazine his “personal enemies.” He also staged a massive rally in Grozny, the Chechen capital, to press the point.

Following his arrest, Kadyrov praised Dadaev as a brave soldier and a deeply religious man. He said on his Instagram account Saturday that Dadaev was shocked by the magazine’s cartoons and the commentaries that supported them.

Russia’s opposition doubts that Nemtsov’s condemnation of the Charlie Hebdo attacks was motivation for his murder, saying that the most likely explanation was Nemtsov’s vocal criticisms of Russian President Vladimir Putin.