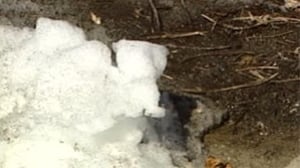 Sniffling, sneezing and a runny nose. Are you excited for spring yet?

Hay fever symptoms such as coughing, nasal congestion and burning eyes could be a sign you’re allergic to snow mould or other fungi present during spring.

Mould allergies and allergic rhinitis, often called hay fever, affect about 10 to 20 per cent of the population, Dr. Paul Keith, an allergist and associate professor at McMaster University, said in an interview.

Melting snow can create snow mould, which may cause allergic reactions in some people. (CBC)

While exposure peaks in summer months, allergy sufferers may start to notice their symptoms on damp spring days due to an increase of mould, including snow mould, Keith said.

“Snow mould makes it sound like the snow actually produces a mould, which it does not,” said Lilly Byrtus, an Edmonton-based regional co-ordinator of the Allergy/Asthma Information Association.

Snow mould — a fungus that grows under snow, on grass or dead organic matter — occurs when there is heavy snow cover on the ground that is not completely frozen for an extended period. The fungus thrives when the soil surface temperature approaches 0 C and the snow starts to melt.

“As the snow is melting, you get a lot of moisture in the environment and that can increase mould growth,” Keith said.

Snow mould can look like cobwebs covering the ground and can lead to circular patches of dead grass that vary in colour from bronze-pink to a fuzzy white, Dr. Tom Hsiang, a professor in environmental sciences at the University of Guelph, said in an email interview.

Snow mould occurs at different times every year, depending on the weather. The time it starts also varies from province to province.

“Like for us in Edmonton this year,” Byrtus said, “we’re at mid-March and a lot of the snow has melted already, so the snow mould has already become quite prevalent in this part of the country.

“And I know that Eastern Canada is dealing with a lot of blizzards … so clearly they don’t have snow mould right now.”

Even after the snow melts, a person with sensitivities may have repeated flare-ups if there’s another snowfall.

Snow mould can be persistent

Depending on the weather, the fungus may last from a week to over a month. Windy and rainy days kill off the mould; the wind dries it, and the rain washes it away. But snow mould can persist until the warm weather arrives. According to Hsiang, it does not generally grow when the temperature is above 20 C.

“Typically the grass has to be dry and clean and growing green before there’s for sure no more mould on it,” Byrtus said.

But the absence of mould does not necessarily mean allergy sufferers can expect relief. Inflammation can be self-sustaining and symptoms may continue even after there is no exposure, Keith said.

However, Hsiang disagreed that the two major types of snow mould, grey and pink, have a large impact on allergy sufferers. He said grey snow mould very rarely produces spores (reproductive cells) and that pink snow mould spores are much less prone to be spread by the air and to cause allergic reactions by inhalation.

“There are other fungi … that produce abundant spores after snow melt on dead, wet plant tissues, and these ones are more likely to cause allergies to people with such sensitivities,” he said.

Keith recommends allergy sufferers install an air filter on their bedroom window or just keep their window closed. If a mould-sensitive person must do yardwork during the spring, an allergen mask should be used to avoid inhaling mould particles. But ideally, an allergy sufferer should take preventive measures such as raking leaves in the fall instead of spring, and breaking down snowbanks to reduce the moisture mould needs to survive.

“Helping the snow to melt faster will certainly speed up the process of getting rid of the mould that’s accumulated in that snow pile,” Byrtus said.

She also said that if people with mould sensitivities pay attention to when their allergies usually begin each year, they can start taking medication earlier in order to minimize their symptoms.

“If possible, start taking allergy medications before the season starts, but certainly right at the beginning when you start having mild symptoms. Don’t wait until they get really strong,” Byrtus said.

Keith said that if antihistamines don’t work, a sufferer should see a doctor, who will be able to recommend other treatments such as prescription nasal medications.