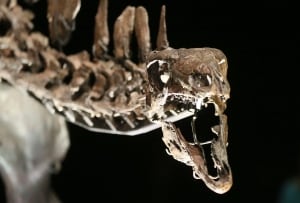 Scientists at a British museum have worked out the living weight of Sophie, one of the world’s most complete Stegosaurus skeletons.

London’s Natural History Museum said Tuesday that Sophie, a young adult when it died around 150 million years ago, weighed around 1,600 kilograms and its body mass was about the same size as a small rhinoceros.

The scientists worked out the dinosaur’s body mass after creating a 3D digital version of its skeleton, calculating the volume of flesh around the bones, and comparing the data with information from similar-sized modern animals.

“Now we know the weight, we can start to find out more about its metabolism, feeding requirements and the growth rates of Stegosaurus,” said Paul Barrett, the museum’s chief dinosaur expert.

“We can also use the same techniques on other complete fossils to find out much more about the wider ecology of dinosaurs.”

The 150-million-year-old Stegosaurus stenops is the first complete dinosaur skeleton to go on display at the Natural History Museum in nearly 100 years. (Paul Hackett/Reuters)

While scientists have known of the Stegosaurus for more than 130 years, they lack in-depth knowledge about its biology.

The skeleton, which is 85 per cent intact, greets visitors entering the museum. It was discovered in 2003 at Red Canyon Ranch in Wyoming.

Sophie is relatively small, standing about 3 metres tall and measuring 5.6 metres long from head to tail. An adult male Stegosaurus can grow up to nine metres long.

See how the Stegosaurus was assembled in the museum