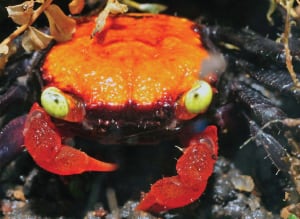 Two new species of “vampire crabs” have been identified by scientists.

Their bright yellow eyes have a piercing glare as sharp as their pincers, but don’t worry too much about these tiny critters sucking your blood any time soon.

Peter Ng, Christoph Schubart and Christian Lukharp identified the new species, named Geosesarma dennerle and Geosesarma hagen, in the Raffles Bulletin of Zoology (pdf of the study can be found here). They traced the habitat of the freshwater crabs to Java, Indonesia, after years of ambiguity about their exact origins.

“These crabs are kind of special because they’ve been around in the pet trade for 10 years, but no one knew where they came from,” Lukhamp told National Geographic.

Dealers claimed that they were taken from locations as diverse as Sulawesi, Krakatau or the Riau Islands, as well as Java.

The bright orange vampire crab Geosesarma hagen is a little wider and stumpier than its purple brethren, and feeds on insects in its damp habitat, burrowed under rocks near rivers. (Chris Lukhaup/Raffles Bulletin of Zoology)

Nicknamed vampire crabs for their yellow eyes, they’re also distinguished by their deep purple or bright orange shells. Since their discovery roughly 10 years ago, they’ve been exported to Europe, East Asia and North America.

The rounder Geosesarma hagen sports an orange or yellow appearance flecked with grey, and feeds mostly on insects hiding underneath vegetation found below or between rocks close to the damp ground, such as near a river.

Both species are generally similar to other forms of the Geosearma crabs catalogued in the 1980s, other than their distinctive bright carapaces. The predominantly purple Geosesarma dennerle has an ivory white patch on its back. They live under and between rocks, or in dense vegetation, eating mostly small insects such as grasshoppers, as well as plants.

The paper notes that these crabs’ popularity among local collectors has led to a decrease in both species’ population. “Clearly, the continued collection of these crabs for the trade is not a sustainable practice, and if the popularity of the species continues, a conservation management plan will have to be developed, probably including a captive breeding program,” it says.